M2000A - AMATEUR RADIO INTO THE MILLENNIUM

The special event station M2000A celebrated the new Millennium from English Heritage's Ranger's House, lodated on the Prime Meridian at Greenwich, South East London in England. Two months of activity netted over 47,500 QSOs in 202 DXCC entities making the last QSO at 1900z on Tuesday 29th of February 2000. This article provides an insight into how Cray Valley RS mounted perhaps the most successful amateur radio special event station of all time. 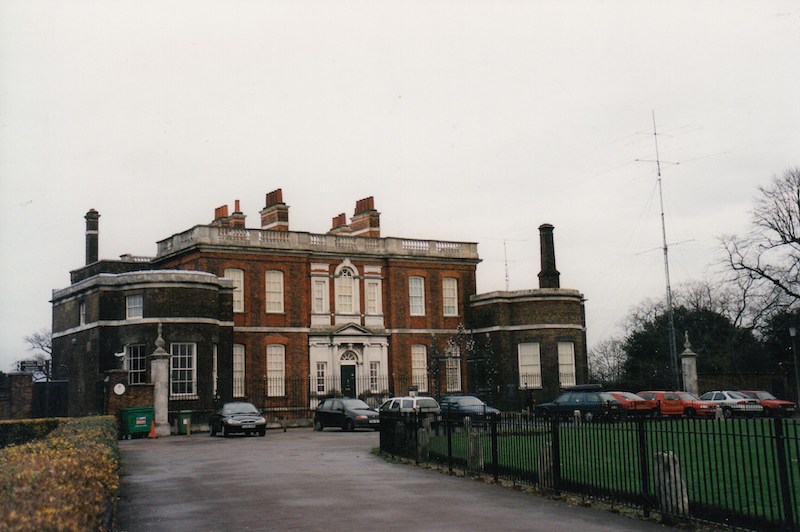 There was a great deal of planning and organisation that needed to be undertaken before the station could be a reality. The M2000A team was commited to ensuring that we hit the bands with a top-of-the-range station from a prestigious location.

Some important milestones for the project:

After many months of planning and frequent meetings with English Heritage, the project came to fruition in late December, 1999.

Ranger's House is a 17th century villa standing on the edge of Greenwich Park. It is situated on the Greenwich Meridian and has a garden area to the south east and a tarmaced area to the north west. The tower to support the 7MHz, 21MHz and WARC bands antennas were located in the garden area (together with a dipole for 3.5MHz).

As the tower was in a garden environment, guying was by traditional 4 foot stakes driven into the ground. However, the guying arrangement for the tower on the tarmaced area was altogether different. Through the good offices of Bronzeshield, a local crane company, 3 x 2 ton blocks were positioned by crane. These provided the guying positions for the tower that supported the TH5 and the 28MHz yagi.

The VHF antennas were supported on a 40 foot tower which was un-guyed. All the antennas had been partially pre-assembled and this saved a great deal of time. However, the antenna assembly and tower erection, although it went smoothly, took two days to complete due to a number of factors, including snow on the second day and the shortness of daylight.

All the antenna erection work was closely supervised by HighLine Communications Ltd. Coaxial and rotator cable was provided by Mike G3SED and Neville G3NUG. Once the antennas were in place and the towers raised to their desired height, 500m of cable was routed into the M2000A shack!

The antenna configuration was as follows: 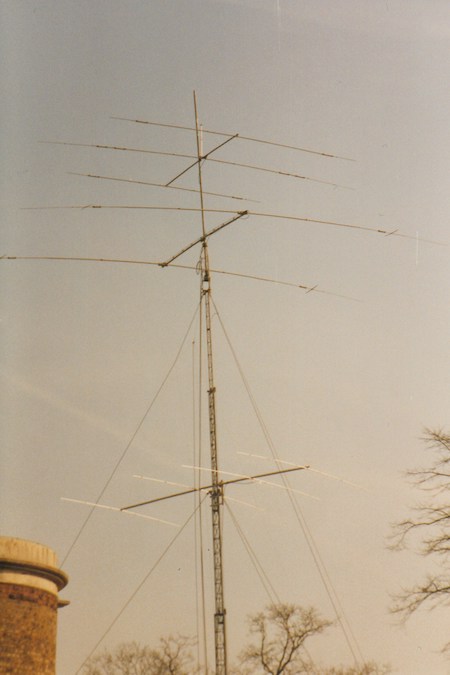 All the transmitting equipment was provided by Icom UK. They provided an IC-756PRO and IC-PW1 Linear Amplifier, 2 x IC-746, IC-775DSP and an IC706MkII.

A great deal of work was carried out - supervised by HF Manager Dave G4BUO - to install foolproof switching to avoid inter-station interference and to ensure that the need to switch antennas between stations was kept to a minimum.

Logging at M2000A was by Turbolog, written by John G3WGV. The logging program formed part of a packet radio based network and was linked to a server located away from the five operating stations. QSOs were sent automatically to the server as they were made. The server was also connected to the Packet Cluster and relayed DX spots to the logging PCs.

The DXserver was originally conceived as a way of bringing together the logging operations of a major DXpedition with minimum disruption to the operators and with maximum security. DXserver was successfully used on the 1998 Spratly Island DXpedition where over 65,000 QSOs were logged in 12 days of operation. DXserver was further developed by John G3WGV for use at M2000A.

An ASCII data file containing callsign, band and mode was sent to Richard G4ZFE at regular intervals and he added the QSO data file to his search engine on the Internet so that anyone with Internet access could interrogate the data on the M2000A website to see if he/she was in the log. 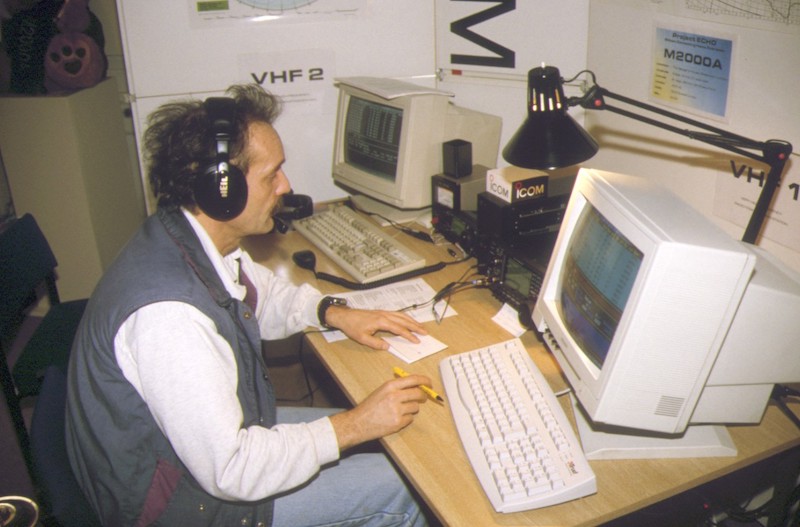 While the radio station was being assembled, Ian G7PHD was busy with Steve G0TDJ and others establishing a static and "hands-on" exhibition charting amateur radio from Marconi to the present day.

A commercial company, Display Colour Ltd, provided professional 3ft x 2ft display boards, and both the Radio Society of Great Britain (RSGB) and Gerald Wells's Vintage Wireless Museum in Dulwich provided exhibits of radio from the early 1900s. We demonstrated the contrast between radio from the early 1900s and today by displaying the latest semi-conductors and micro-processors side by side. In addition, the exhibition featured the latest Geoclock software (provided by Joe Ahlgren), Icom IC-PCR1000 computer-driven communications receiver and the latest Arcam broadcast receiver.

There was also an RSGB bookstall.

Special mention must also be made of some of our other supporters, Guilbert Niceday Ltd for providing all the tables and chairs; C M Howes Communications who provided receiver kits which the school parties purchased to make as special projects back in the classroom; and Mutek Ltd and Maplin Electronics Ltd, who provided important components which were used for both the antenna installation and the essential internal display.

Before our initial contact with ZL6A in Wellington, New Zealand (at 1100z midnight in ZL), those present enjoyed a champagne reception courtesy of J Sainsbury PLC - one of the UKs leading Supermarket chains. A special celebration cake was supplied by Marcia 2E1DAY, while Westmount Flowers provided a pleasing floral display.

The first contact was successfully completed and various "Greetings Messages" were passed. Once the M2000A/ZL6A sked was complete, all five stations at M2000A became active and so the pile-ups began. In the first five hours of activity, 1176 QSOs were put into the log. A number of other first day skeds were completed - 9G0ARS, HS2000, W2M, K3Y, YL2000UZ, ER2000D, PB6UTC, WY2000, ZW2OOO, etc. In all, M2000A contacted 17 special Millennium stations and made 2,600 QSOs in the first 13 hours of operation. By the end of the operation, M2000A had contacted 52 special Millennium stations - highlights outside the first day were J282OOO, 6K2K and TP2000CE.

Most days 2 or 3 of the 5 stations were operational and an average of 500 QSOs were made - many more at the weekends.

One of the specific aims of the project was to enable students of all ages to learn about amateur radio. Our first school party came on 7th January and 8 children passed "Greetings Messages" to several amateurs in the USA. This trend ran through all 15 school visits - during one visit all 33 children passed messages!

Every child who visited M2000A received an RSGB "Project Millecom" certificate and a "goody bag", kindly sponsored by Icom UK.

The M2000A team are indebted to everyone who sponsored or supported the event. Without their help, M2000A would not have been possible.

We were very grateful for all the sponsorship which ensured the success of M2000A. This ranged from the provision of the transmitting equipment by Icom UK, most of the antennas from South Midlands Communications, all the computer hardware from CompuData UK, tables and chairs from Guilbert Niceday Ltd, the celebration cake from Marcia Brimson 2E1DAY and the floral display at the launch from Westmount Flowers - the list is endless, but a special word of thanks goes to Chris G3VHB, Strumech and SMC for the loan of the three trailer-mounted towers which supported the antennas. A complete list of sponsors/supporters were:

M2000A had a number of privileges and many class B licensees and novices made full use of this facility.

We also had a special dispensation which allowed non licensed people to conduct QSOs under supervision and as the station was open to the public each Wednesday to Sunday, we took the opportunity of allowing visitors to pass "Greetings Messages" as often as we could. Age was no barrier as people aged 8 - 80 passed messages.

M2000A clearly provided a great advertisement for amateur radio. There were several occasions when school radio clubs called us while we had children in the shack and we were able to let the children pass messages to each other.

Included in the amateur visitors were Timo OH1NOA, Ole LA2OHA and Zyg, AF4MP. We also brought back vivid memories for the widow of G6YP who, with the help of the RSGB's Yearbook, was able to remember the callsigns of stations worked by her late husband.

However, our main overseas visitors were Dave K2SIX, Debra N6MQQ and Terry N6MON. Dave worked our only 50MHz Sporadic-E QSO - with IK8DYD, while Debra and Terry, members of the Hayward Amateur Radio Club, were spending a few days in the UK and spent an afternoon working on HF. They were delighted to contact their club chairman on 28MHz.

As well as the public and our amateur radio visitors, we were delighted to welcome a number of local dignitaries including the Mayor of Greenwich (who passed several "Greetings Messages" to amateurs in the United States). It was an aim of the project to demonstrate amateur radio to local people with the hope of encouraging them into amateur radio.

Pride of place goes to our ARRL CW entry. G3XWK, G3WGV, G4VXE, G0OPB and M0CFF made 1,700 QSOs with 214 Stateside and Canadian multipliers with a score over 1m points.

Justin G4TSH ensured an M2000A presence in the RSGB's 7MHz CW contest, and Dave G3JJZ was the mainstay of our entry into an Italian 6m contest.

Although M2000A was not a DXpedition, the callsign was well sought after.

It was not difficult to make QSOs on the HF bands. We had some brilliant pile-ups - especially on 14MHz SSB on the first day and on 28MHz SSB on numerous occasions. We were amazed how much DX called us but we also had the use of the Packet Cluster to bag some equally tasty DX.

The M2000A log included some mouthwatering DX and our our QSL Manager, Owen G4DFI, had the task of collecting the cards needed in order to claim DXCC, WAZ, WAS and IOTA awards.

Turning to VHF, although M2000A did make over 1,000 VHF QSO's, the 50MHz and 144MHz operators were generally disappointed with the lack of activity. Best DX on 144MHz was down into Germany, while on 50MHz the one Es QSO with Italy provided the best DX, although we did hear the HC beacon one afternoon.